My parents knew there was something about my anger, temper, being quiet and shy, and just not achieving the same as my peers at the same time that wasn’t right.  They had no idea what was occurring until I received my KS/XXY diagnosis in February 1996.

Throughout my life and primarily before my diagnosis, I saw many psychologists, psychiatrists, therapists and physicians to try to determine why I was having so many issues in school with learning, socially, behaviorally, and with extensive mood changes.  They could not determine anything specific while testing me for everything from A-Z. My testing began as early as 1973 through the late 1980s.

Klinefelter Syndrome was not even considered since it was so rare and unheard of at that time.  Even now, as I rewrite my story in 2019, KS/XXY still isn’t a mainstream condition that you might equate with Autism, Down Syndrome, Cancer, or the many other well-known medical conditions. Throughout all of the testing, the only thing that was of significance was the variety of learning differences that I had which created many problems during my schooling years.

My learning differences consisted of reading comprehension, abstract thinking, understanding of non-visual materials, word retrieval, some slight memory retrieval, auditory processing, and the taking of standardized testing. I was meant to feel inferior and stupid by some of my teachers in elementary, middle, and high school. I was bullied by classmates and peers and was very immature for my age.  Got into some dangerous situations because I wanted friends and would do whatever someone asked me to do if they would just be my friend. My self-esteem was low, I felt confused and didn’t know how to handle myself in those schooling years.

In second grade, I was told by my primary teacher that I would never amount to anything.  In seventh grade, a psychologist told me that I would probably live at home forever, would never have a good job, and would never be successful in life.  Imagine being told that as a vulnerable young boy and teenager! After being told those things, I was convinced that I just needed to prove everyone wrong who said I wouldn’t be successful in life. It has been a very redeeming quality of my life to be able to show those downers that I could make it in this world despite being told I was basically a loser. 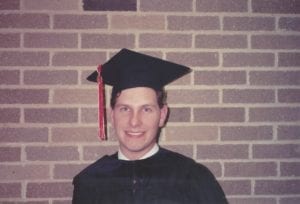 I spent a lot of time during my first few years of college figuring out how to fix my learning issues and not having them be a way of stopping me from succeeding and living my life. Eventually, I realized why do I need to fix my deficits, I can just work around them and focus on the positives and strengths.  So, I had to figure out what my strengths were and how I would plan on focusing on my best facets of learning.  What I found as being strengths work for me, may not work for others as its truly figuring out your learning style and modifying it for yourself.  For me, I must focus on visualization, repetition, and hands-on learning.  Sounds easy, right?

I found that if I was shown something, even only once, I could continue to do it.  I could adapt that style to whatever I was doing.  Repetition, meaning lots of reading, and especially re-reading.  Re-reading something three times allows me to fully grasp the concepts and meaning and truly understand.  I can’t say it was easy especially throughout college re-reading hundreds of pages between classes. But it was certainly effective and easier than the alternative, failing! Visualization to me is a concrete way of thinking.  I do not do well with abstract thinking and concepts.  If I can’t visualize what I need to do, whether it was for school or working in my adult life, I would struggle and have to spend a lot of time thinking about what I am being asked to do.

A number of things in my adult life would not be possible without those learning strategies that I developed to figure out a way of going forward with my life. 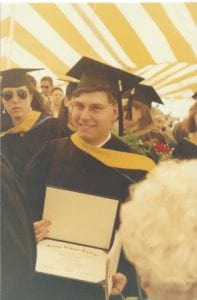 During my six-year journey throughout college, which began in the fall of 1989 at a community college outside of Baltimore, Maryland, I experienced many things.  I worked almost full time while in community college.  I was still undiagnosed with Klinefelter Syndrome at this time and I still struggled socially, emotionally, had anger issues and didn’t feel I was as mature as my peers around me.

I spent three years at this particular college graduating with an A.S. in Business Administration in May 1992.  I took many classes in lots of different areas to fulfill lots of required classes but also took classes that were of interest to me and experimenting with other types of courses.  For instance, the class where I took an absence to not have to verbally answer questions when it was my required college Science course, Meteorology.  It was taught by a local meteorologist and was a really great class.  I had decent grades, not outstanding, but better than high school.  I was working to perfect my learning strategy methods and that allowed me to experiment with different situations and scenarios.

While at the community college, I saw a college career recruiting specialist to try and figure out the best place for me to transfer to after completing my Associates’s degree.  Remember, this was before the internet existed, so going online to find colleges that best fit my skills and what I wanted to do for the rest of my life just wasn’t quite as easy.

Through my career specialist and a variety of career tests, we determined a list of 10 colleges to consider. Through library research and knowing that I wanted to go to New England to finish up my Bachelor’s Degree, I focused on schools up there and then researched in the library and reviewing the materials the career specialist had prepared for me. I planned a trip with my parents to visit seven schools, the majority being small colleges I had not heard of previously.

I ended up choosing Colby-Sawyer College, in Central New Hampshire.  It was a small 600 student Liberal Arts college when I attended from September 1992 through May 1995.  It has more than doubled in size since then. Colby-Sawyer College was an all-women’s college through 1990.  It would not have been possible to attend right out of high school.  I chose this college because it had all of the academics I was looking for, but also plenty of social activities for students on campus and in the area.  I was looking for a small school and not looking to be invisible. Definitely wanted to grow socially, emotionally, and educationally. Found exactly what I was looking for and made lifelong friends. Though I don’t see them often in person, the internet and social media have made it much easier to stay in touch.

I learned a lot about myself and who I was and perfected my learning compensation strategies and really became a functioning member of society.

Colby-Sawyer College was 500 miles from where I grew up and it was my first experience leaving home and being primarily on my own. I graduated in consecutive years, May 1994 and May 1995 with dual Bachelor of Science degrees in Business Administration and Sports Management.  Though my educational goal changed from my first attending Colby-Sawyer College and graduating from here, I got a great education and have applied it to my lifelong career. During my time at Colby-Sawyer College, I achieved some unbelievable educational accomplishments.  Made Dean’s list for the first time ever.  Had a 4.0 semester, only one, but that’s an accomplishment for me.  Achieved honors in several semesters and never had one semester where my GPA was below a 3.0!  Though it wasn’t a storybook ending, I graduated within 2/100ths of a point from graduating cum laude. So much for only getting 680 on my SATs!!!

My first year out of college was a confusing year. It was a year where I was trying to figure out where I belonged in the world and life after college. It was during this year that I received my Klinefelter Syndrome diagnosis.