Since this is a rewrite of “my story”, I would like to start by telling you about my life before my diagnosis occurred. I was born in March of 1970 to very loving and wonderful parents. My parents and other family members tell me I was a happy baby. I was quiet and reserved and generally behaved well and did what I was asked to do. Being quiet and reserved seemed to follow me throughout my early childhood, teens, and even into adulthood. Well before my Klinefelter Syndrome diagnosis occurred. Had considerable difficulty making friends and I do believe that was due in part to my shyness.

Once I made friends, I wouldn’t easily let them go. I would hold on to friendships long after they had broken apart. Though I did find it a lot easier to make friends with either people several years older or younger than I was. 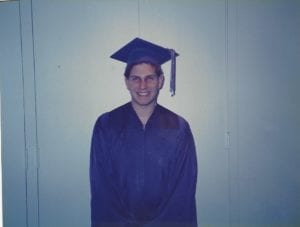 I grew up with many learning differences throughout my life.  I graduated high school, barely, with a 2.02 GPA, which was barely above the state minimum of 2.0.  Though I was frequently called stupid by my teachers and other peers throughout elementary, middle, and high school, I wasn’t a dumb kid.  I was smart in my own way and I found that a lot of my learning issues were because of the way I was taught.  Looking back, the teachers just didn’t know what to do for me or how to help me to be successful.

Normally one is 18 years old at the end of high school.  Though for me I was 19 years since I was held back at Boys’ Latin.

My parents placed me in a relatively small private school called Friends School in Baltimore, Maryland.  I started there in the three-year-old preschool class along with about a dozen other kids, some of whom I am still friends with today. I made some lifelong friends, at Friends School!  Imagine that!  As I got into middle school there, I began to feel awkward and that my learning differences were holding me back, not allowing me to work or understand or learn at the same pace as my peers.

I felt awkward in sports which were required during at least two of the three seasons.  I did pretty well in soccer and even scored a lone goal in one of the games during my seventh-grade season.  Played on defense, but somehow got a shot on a goal and it went in.  One of my prouder team sports moments!  I tried lacrosse but didn’t like the physical and violent nature of the sport.  I tried wrestling but didn’t have much upper body strength.  Didn’t realize it was my lack of testosterone that caused a decrease in upper body strength. Also part of having Klinefelter Syndrome.  I was terrible at basketball and still am.

Eventually played softball in my eighth-grade spring sports season and enjoyed it and could really hit the ball far.  My eighth-grade year was the first year of the co-ed softball team and where we played other area schools.  I did well with the bat but tended to be afraid the ball would hit me in the outfield.

I enjoyed my time at Friends School but was totally crushed midway through eighth-grade when my parents were told that I could no longer remain at the private school. The school felt I could no longer compete in such a competitive environment and that my learning differences kept me from keeping up with peers. I was devastated and didn’t know how to handle being told I had to leave. I had gotten to know some of my closest friends for up to eleven years.

My parents took me to visit several schools in the area, three private schools, and a public high school.  It was a thing at that time to visit schools in advance before choosing to go there.  Two of the three private schools were specifically geared towards students with learning problems.  However, one of the schools was a place for those who had behavior problems.  I couldn’t wait to leave that school and knew it wasn’t the place for me.  I wasn’t ready to go to a public high school in Baltimore City.  It was rough and I felt immature and totally overwhelmed.

The last school I visited was Boys’ Latin, an all-boys private school in Baltimore, Maryland. When I started there and took the placement tests, I was deficient in numerous areas and was told I would have to take summer school classes.  I was not the only one in summer school and its where I met my first classmate who would be in my grade.  I was also told that I would need to repeat the eighth-grade and not move on to ninth-grade, as I anticipated doing. I was a little upset, but knowing that I knew no one at this school I figured it was okay. 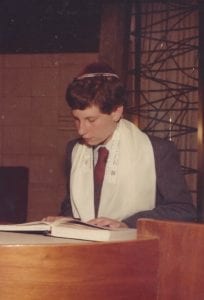 The summer school was rough and long, especially after just completing my eighth-grade year at Friends!  I was ill-prepared for taking Latin and some of the remedial classes I took that summer of 1984! I was in summer school for the last two weeks of June and all of July, as well as the first week of August.  Then I was allowed to take the remainder of the summer off before starting my eighth-grade repeat year at Boys’ Latin.  This school required all boys to attend wearing a jacket, tie, button-down shirt and dress shoes.  Imagine changing for gym class and then having to get back dressed into your tie and formalwear for school.  It was certainly a change from what I wore at Friends.

Starting eighth-grade again at this new school was a mistake.  For starters, I was the new kid, the only new kid coming in eighth-grade.  I was the new kid from a rival private school and everyone seemed to know it.  Already had difficulty making friends, but coming here from a rival private school made it even more difficult. I felt awkward, different, and just cried many nights wishing I hadn’t had to make a choice to come to Boys’ Latin. Why did Friends’ School make me leave?  Why couldn’t they allow me to stay and work with my learning differences? How was I going to survive? Why did I have to leave lifelong friends?  In 1984 I couldn’t understand why my life had taken such a difficult and drastic turn and how was I going to survive.

Spent the majority of my second eighth-grade year alone.  Since I was awkwardly shy, I didn’t make any friends until nearly halfway through the year.  Felt terribly out of place in gym class, strange changing clothes in front of my peers, and incredibly embarrassing having to take a shower with my peers.  It was just something that I wished I had never had to do.  I did make friends in the second half of that year and was the manager of the baseball team.  I tried out to be a member of the team, but I got cut and became the manager instead.  My teammates and coaches respected the job I did as a team manager.  At the end of the year softball game, I showed my athletic ability with some pop in my bat with two home runs.

Though my year at Boys’ Latin wasn’t anything to write home about and I wished I could have stayed at Friends’ School, it certainly toughened me up and I learned a lot about how much adversity I could handle even being unhappy during that school year.