As I rewrite my story now in September 2019, I have been living alone for over three years and officially divorced for two years.  I am certainly enjoying the single life again.  My sweet dog and I live together and she is the best roommate!  You’ll see pictures of her and me in this brief look into my life and my story.  I have certainly reflected on my life both before and since the diagnosis has occurred.  When she and I originally started dating, I felt like I was dating and then married my best friend.  I had hoped it would last forever and the friendship would remain post-divorce. But a bad ending to the marriage and a bitter divorce ended all hopes of that happening.  I think losing the friendship is truly what I regret the most in the end.

I am still working as a software test/quality assurance engineer. My career has now spanned 23 years in the same field.  I now primarily work as a government contractor, and I still test and break software and that’s what I get paid to do.  I enjoy my job about 80% of the time and that’s satisfying. When I get tired of it, that’s when I know it’s time for a change and move on to a different company or contract.  Though I will likely continue to work in this field, there are some other technical components that I plan to learn to add to my repertoire of knowledge.  I did forget to mention that I am almost completely self-taught in computers and IT.

As mentioned, I earned my Bachelor’s degree in Business Administration and Sports Management.  I started hacking away with computers in the early 1980s and just built up my knowledge throughout.  I started my own business at 19 years old and ran a typing service as the owner and sole employee from September 1989 through September 1996.  Specialized in term papers, thesis, legal reports, legal and medical transcription, marketing flyers, and resumes.  I was a good option for quick and inexpensive service at a time before many people owned personal computers and before the internet became what it is today.

Over the past 23 years since my diagnosis, I have completed just about everything that I have been able to do for this community.  I have helped to start more than a dozen regional USA support groups, about a half dozen internationally.  Have co-chaired two national conferences, and presented at many more.  I have been an intricate part of KS&A as a regional director/coordinator, support group leader, and conference coordinator.

A founding board member of AAKSIS and many other hats it takes to start a brand-new national organization.  Have been asked to give presentations at regional and national genetic meetings, and American Speech, Language, and Hearing Association (ASHA) meetings.  Exhibited at several regional and national genetic conferences for both KS&A and AAKSIS.  I have spoken with many specialists about Klinefelter Syndrome/XXY and how it affects and manifests itself.  By doing so, they can take information back to their practices and help kids and others who need their expertise.  My ex and I regularly brought the condition to light in the school system our kids attended so they would know about it to help others in similar situations.

I have appeared on television and in print.  Locally on the news in Baltimore, Washington, and Boston. On a Public Broadcast System (PBS) 1990s show called HealthCast.  They featured a segment about Klinefelter Syndrome which appeared in September 2001 and then again on their special Christmas episode highlighting the most-watched episodes throughout the year.

As mentioned earlier, in the Summer of 1998 and at the suggestion of members of the Denver support group, I developed, produced, and created the first video presentation about Klinefelter Syndrome.  Although it helped many people, it was a pretty comical video in the way it was done.  Maybe I’ll eventually put it up on my website for all to see.

Speaking of my website, I have had one for Klinefelter Syndrome since the early part of 1998.  I built it myself, one page initially and eventually it became 108 pages linked together with little fanfare but provided important information to those who needed it.  It utilized early internet technology; however, I recently launched a new WordPress website which is much easier to update and manage.

I am still working on a book, an autobiographical compilation of my life.  The book, when completed, will be a more in-depth version of “my story”.  Unfortunately, time and availability have gotten in the way of completing it. I will likely self-publish, though, with a dissolved marriage, many sections have to be completely revised. No fear, though, the book will get completed!

I’m not trying to gloat with all of the things I have accomplished since my 1996 diagnosis with this rarely heard of, and somewhat difficult to diagnose the condition. I simply jumped in feet first after I was diagnosed partially because I needed support; but mainly because I wanted to help others. It was important to give back so no one would have wait 25 years or longer to receive a diagnosis.

I learned at my first support group meeting, in May 1996, the abortion rate was very high for women receiving a prenatal diagnosis. Approximately 80% terminated pregnancies when receiving an XXY diagnosis.  Doctors and geneticists were giving out very old, scary, and incorrect information.  Some of this information is still on the internet today!! This is certainly not a condition in which one should consider terminating a pregnancy.  The condition can be mild and manageable and with a growing support network, it has grown in leaps and bounds in the past 23 years.

Someone recently told me that this diagnosis has made life matter for them.  That they are now able to see a meaningful purpose for their life to be lived and to help others with this condition not feel alone and help them move forward.  I feel the same way, it’s why I got involved as quickly as I did.  My parents tell people that I have “turned lemons into lemonade” by getting involved.  They are so right!  I frequently have people come up to me at conferences and say, you are so wonderful being there for me and my child(ren) and family.  I just see it as a regular part of my life and don’t see myself as special for this reason.  I’ve just decided to give back, help others, and help as many people as possible who live with Klinefelter Syndrome/XXY.

I have been involved with others who have also jumped in and have become an effective force in improving awareness and knowledge and improving positivity with the condition.  My friends Ryan Bregante, Kelsey Maffei, Emily Waddie, and Samuel Pierce and others who are leading and building a strong movement of awareness and understanding.

For a long time, I felt like I was one of only a handful to be strongly involved and working to a better understanding of this condition and bringing people together and expanding the network. The four individuals mentioned, as well as many others, are helping to bring light to this condition. I look forward to continued involvement with all four of them and many others.  There are many others along the way who have been instrumental in working and helping Klinefelter Syndrome become better known.

I have done for the community because I’ve wanted to help as many people as I could. Upon being diagnosed and learning about Klinefelter Syndrome, I wanted the younger generation not to have to go through a lifetime of concerns or misdiagnoses or wondering, why me!  I’m glad there is a strong group of people in this community interested in helping to raise awareness and take the message around the globe.  I’ve had times where I felt a little burnt out over the years with getting and staying involved.  Over the past two years, I have had a newfound sense of spirit and energy to work even harder to continue helping and giving of myself to the organizations and the people who need us.  I’m still balancing out my life with work, spending quality time with my dog, Klinefelter volunteer work, dating and traveling, and completing my book.

For everyone reading this story rewrite, I apologize for the length, breaking it up into many parts makes it a lot more manageable to read.  I wanted to make this more complete version since I can look back and not be writing as things happen.

I expect parents and adults with Klinefelter Syndrome or just XXY are initially looking for is some compassion and empathy. Both of those things were not given to me by my physician just after my diagnosis.  I expect they are looking for confirmation.  The parents receiving a prenatal diagnosis will be trying to decide if they should abort their pregnancy.  Even now in 2019, the abort rate for parents finding out prenatally is way higher than it should be.  It doesn’t need to be and shouldn’t be this way.

Klinefelter Syndrome, or just XXY, if one is diagnosed before puberty may never develop the set of symptoms that Dr. Klinefelter identified as being a part of the syndrome. We may simply just be XXY or some variation of that. Klinefelter Syndrome isn’t something that should be looked at, at a dreaded condition.  Look at some of the positives of my life within “my story”.  I urge the parents to read this and trying to decide what to do with their unborn son, to get the correct facts and information before making that crucial decision. In my honest opinion, my answer is the same in 2019 as it was in 1998. I believe that aborting a baby being born XXY, is wrong.  There are far worse conditions out there when deciding to abort could be right, fortunately Klinefelter Syndrome or XXY is a manageable condition.

I am here, willing to talk to anyone, both one-on-one and in a group situation about Klinefelter Syndrome and my life living with it.  I am willing to talk to you via email, on the telephone, or in person.  As you can see, I am not shy about having this condition.  I was born with it. I’m not ashamed that I have the condition. Instead, I thrive on it!  I wouldn’t be the person I am today without receiving this diagnosis.  I’ve lived a great and successful life and will continue to do so although I was diagnosed later in life.

I have had most of the symptoms at one time in my life and have gotten through and done very well.  I’ve done what I needed to do to succeed.  I never wanted help after high school because I always believed I could succeed on my own.  Figuring out my compensation strategies has made a difference in my life.  I am one who has survived and has made my life successful by giving back and helping others who have this condition 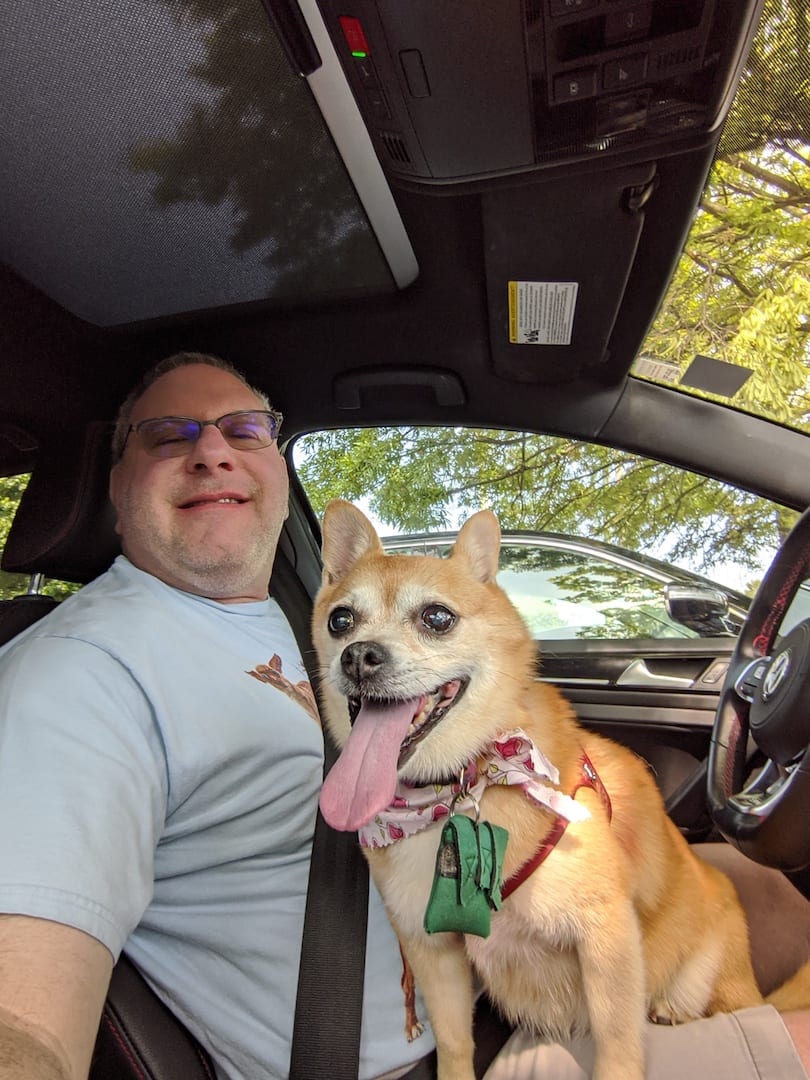 Please feel free to contact me at the following email address: sschwarz13@gmail.com and I will be back in touch with you as quickly as possible and we can arrange a time to talk on the phone, or, if we are close enough in proximity, arrange an in-person meeting.

I hope this has given you a little perspective into who I am and what I’m all about.  If I can be of some help to you and/or your family, please don’t hesitate to contact me.  I would be more than happy to talk to you about anything Klinefelter Syndrome/XXY related. And can help and assist you in any way I can.  Please feel free to contact me at any time.