After that year, my parents decided moving to Baltimore County would be a good option and thus began my first years at a public school. I started ninth-grade at Pikesville High School in Pikesville, Maryland. Here I knew that I would not be the only “new kid” on the first day. The majority of my peers came in from middle school, but come from other schools, so I wasn’t the only one! Though I still felt awkward, I did know a couple of students on my first day. Some I had met through various activities like driver education.  Some through friends of my parents who had kids also going into ninth grade at Pikesville High with me.

Public school for me was a whole lot different than private school.  On the surface, it didn’t seem as competitive, although later during my four years here I found that there was a very competitive side of the class of ’89! Public school, a large class of over 250 students, allowed me to blend in somewhat, or, as I liked to call it, I disappeared.  Being quiet and shy, I could just disappear and get by and pass without much fanfare or existence.  I wasn’t getting called on much in class and I just faded into the background.  However, I was still bullied by my peers and deemed an easy target by upper-grade students.

In one particular incident in Freshman year, after lunch before going to my next class I used the boys’ bathroom near the cafeteria.  This bathroom had one entrance/exit.  When I walked in some older students were smoking and using the bathroom.  I was shy and very quiet and just went about my business.  They left and when I heard them leave I heard a click when the door shut.  Not thinking about what that was, I finished up and went to leave to go to class and the door was locked.

Somehow those students locked me in the bathroom and there was no way for me to get out.  This was way before the days of cell phones as it was the Fall of 1985, and I was stuck and getting more scared by the minute.  What was I to do to get out of here and what did I do to deserve this?!?  I banged on the door and yelled loudly, let me out of here I’m locked in.

Eventually, a janitor came and unlocked the door with his keys.  He asked me what happened and I told him some seniors locked me in when they left.  I didn’t know who they were and I was scared to tell them names even if I had known.  When I was finally let out, a group of students were outside and I felt embarrassed that I had been locked in and that someone had to come let me out.

For quite a while after that “bathroom” incident, I was fearful of going into a bathroom where there was a door that could be locked.  I avoided that particular bathroom for the remainder of my time in high school.  Even when I had classes right across from it, I would find another restroom to visit. Many did not have an entry door, so there was no way I could be locked in.  I certainly believe some of the fear from this incident affected me for many years and in many ways, some of which I did not understand until my diagnosis of Klinefelter Syndrome occurred and I realized how irrational that fear was.

By senior year I had a number of friends in the class of ‘89.  I had crushes on some of my classmates but was too shy to tell any of them.  I had not experienced a “real” kiss throughout my entire four years in high school.  Finally, in my senior year, I realized I had friends throughout my four years who had been in the majority of my classes with me.  In both junior and senior years, I had friends and had fun. I was allowed to take a weight lifting class only for seniors.  Couldn’t figure out why I didn’t build muscle 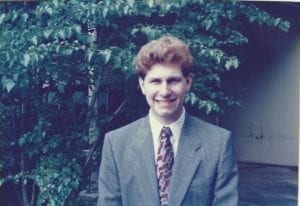 and didn’t understand until I received my diagnosis with Klinefelter Syndrome.  I didn’t realize my decreased level of testosterone was affecting my ability to build muscle and upper body strength.

In my senior year, I had the opportunity to be a part of a cooperative education program. With this program, I went to classes in the morning and worked in the afternoon. I worked for a specific employer that provided a program where students are mentored and learn new skills and abilities.  I worked for the Pikesville Chamber of Commerce and had an eye-opening experience.

For the most part, I loved the job in the afternoon and it allowed for a nice split day and start to jump into the working world.  I enjoyed not having to spend the whole day at school.  Really got involved in something else.  I was still extremely quiet and shy and was scared to do certain tasks. Had to eventually had to figure out how to do them even though I was frightened.  Didn’t want to tell my manager that I was afraid, I wanted to be an adult and just do it.  I certainly took my lumps and tried not to show my fear, but deep down I was terrified!

In regards to my shyness, I often would try to make myself disappear or become invisible or totally blend in with everyone else.  I was so shy, in my third semester at community college, I took an absence when called up to complete the morning questions on the board.  Even though I knew all of the answers to the questions, I was too terrified to get up in front of everyone in the class and write on the board.  Mind you, this was a two-and-a-half-hour class which occurred twice a week, and I took an absence.  This wasn’t a huge class, there were maybe 40 students in the class, but even after three weeks, the professor didn’t know our names and faces yet. That was certainly the most prominent of example, but there were many more just like that throughout my life before my diagnosis occurred.

I also had a very bad temper that would usually occur from storing too many angry events without slowly letting them go. instead, I let them build up like a volcano and eventually would explode with huge amounts of steam and lava spewing everywhere. I was usually uncontrollable while spewing angry, foul-mouthed words and things that I didn’t truly mean. I would generally apologize to those who I yelled at within minutes of spewing that anger. Sometimes I would fly into rages for no apparent reason. Though I understand now that it was the intense pressure of events building up that I didn’t let go of. One minute I would be very calm and the next minute I was picking fights and damaging property.

My anger definitely contributed to the downfall of my marriage, some years later.  In my mid-40’s I voluntarily signed up for Anger Management which was offered free as a part of my health insurance.  For those of you who have seen the Adam Sandler movie “Anger Management”, the six-week evening class was nothing like the movie. I was the only one in the class who wasn’t court-ordered to attend.  But nonetheless, it was an eye-opening course that allowed me to learn principles of why I was getting so angry; and what it was doing to me and those around me. It certainly was not a cure-all for all of my anger issues and required a lot of work outside of the class and even more so today as I continue to work on it.

I followed it up with another class called Dialectical Behavior Therapy (DBT) that followed up on similar principles. The combination of continued work on thinking before reacting, taking a deep breath, and also some medication to help stabilize my moods have significantly helped me with my anger throughout my life. It is something that I will continue to have to be aware of and work to not let it take control of me.