Life after receiving my diagnosis was initially one where I was angry and frustrated and confused as to why it took so long for it to happen.  I was angry at the world for a week or two because I was wondering, why me?!?  I was engaged at the time of my diagnosis.  We had been together for three years and we were planning to have children and a family and be together forever.  Based on past friendships, I continued to try and make things work even though I had now received my Klinefelter Syndrome diagnosis.  We were together on and off for another couple of years, but by 1998, I broke off our relationship citing a need to meet and see other people.

Gradually after the first couple of weeks, I began to accept the diagnosis and move forward and learn about the condition and look into myself and see what would have helped me and been different if a diagnosis had occurred earlier, say, in my mid-teens or earlier.  I started taking testosterone therapy about 6 weeks after my diagnosis occurred.

I was my primary care physician’s first diagnosis in his 20 years of practice. He only looked at my testicles during previous visits to make sure I had two, not to look at the size. I opted to find a specialist to continue my care.  My primary physician wasn’t really looking to determine the size of my testicles until I came in with other symptoms. He wanted to actually check the size of them more thoroughly, which then led to other tests and my diagnosis.  I then decided it was better for me to see an expert about the condition for a more thorough evaluation.

I scheduled an appointment at Johns Hopkins with a top endocrinologist. She had been studying this condition for a number of years and had even worked with Dr. Harry Klinefelter before his death. This endocrinologist was extremely thorough and explained all about the condition and treatment options.  We decided I should start on the Androderm patches, which were large, circular patches that delivered 7.5 mg of testosterone over the course of 24 hours.  However, the patches just did not agree with my skin and caused painful reactions.

I quickly determined this method of testosterone delivery was not going to work for me. Then returned to my endocrinologist and met with her nurse who taught me how to self-inject testosterone into a deep muscle.  I’ve been injecting myself ever since and started roughly in April 1996.  Between April 1996 and September 2019, I have given over 800 Intramuscular (IM) injections.

In early June 2018, I began seeing the same endocrinologist at Johns Hopkins again. She felt I should begin self-injecting a subcutaneous injection of a smaller amount of testosterone every week.  Though I wasn’t sure it was the best course of action, I went along with her recommendation and it has been going quite well.

In May 2019, my urologist became the one handling my testosterone maintenance and he switched me back to IM injections weekly.  However, I quickly found that I couldn’t make it the full week. So I made a suggestion to the urologist to continue doing weekly 1/2 cc injections, but to do an IM injection and then the following week do a subcutaneous injection.  So far, that is working quite well and

At the time of my diagnosis, there were few types of testosterone therapy available.  Now in 2019, there are long and short-acting testosterone injections, patches, various types of gel available, as well as a sublingual pill that is placed inside of your cheek and dissolves.  There are pellets that are surgically placed into a delivery mechanism under the skin and they slowly get used over a 6-month period of time, before more pellets are surgically implanted into the device again. All of those methods I’ve listed are available in the USA.  There is a page on my website which discusses various types of testosterone therapy.

There are a few additional types of Hormone Replacement Therapy (HRT) available outside of the USA, which include oral medication.  Clarus pharmaceutical company was given approval by the FDA (Food and Drug Administration) to produce a new oral medication, Jatenzo, that does not pass through the liver and is a viable medication for those who aren’t able to use the alternatives.

The usual age to start the treatment is around 11-13 years old. The later that one starts hormone replacement therapy, the more problems that can exist. However, being the difficulty in diagnosing Klinefelter Syndrome, as well as the expense involved in having a Karyotype and/or Chromosomal Analysis done, some people, like myself, did not find out until later in life and did not start Hormone Replacement Therapy until later in life.

It would have been great if I could have found out about Klinefelter Syndrome and started on testosterone about 10 years earlier in my mid-teens. Though there is no guarantee that the symptoms I described earlier would have helped even with the onset of a normal testosterone level. The currently available research is not conclusive that any of the learning or behavioral problems would have been any different if I had been treated earlier.

Three months after my diagnosis, and learning about the condition and being on testosterone therapy, I attended my first regional support group meeting.  It was truly eye-opening! I met the organizer of the support group in person after speaking with him literally moments after receiving the diagnosis by phone, and two other adult men with the condition.  Being in a room with others who had a similar variant of the condition, was definitely amazing.  Meeting families with children, and a world-renowned physician who had extensive knowledge about the genetic condition was very helpful. Though I was nervous and still on the shy and reserved side, I went into the meeting and had a nice time interacting with everyone I met.

After my diagnosis, starting on testosterone therapy, and attending my first support group meeting, my life quickly started to take shape.  I was getting out of my introverted shell that had gotten me through much of my first 25 years of life.  The days of disappearing into a crowd and taking an absence in a two-and-a-half-hour college class because I was too afraid to come up to the board to answer questions orally in front of my class were over!  I was finally ready to move on to bigger and better things. 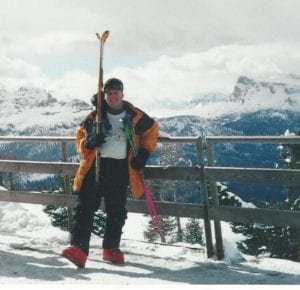 Four months after my diagnosis and about a month after that support group meeting, I found a position as a Software Quality Engineer near Boston, Massachusetts.  I connected through a relative to his friend and interviewed and was hired for my first real job after completing my Bachelor’s degree.  Though it was my first “real” job after college, I had been working part-time since I was 14, in a variety of legal offices, a deli, a fast-food restaurant, a chamber of commerce, and had started my own typing service side business in 1989. I kept my business going throughout college and just as I started my first “real” job after college.

I wasn’t sure how I would enjoy being a Software Quality Engineer but knew that I would learn a lot and have some on the job training since this was not part of my field of study.  However, I have always been involved and interested in computers and this job was right up my alley.  Plus, having a typing service involved being heavily detailed oriented, which is also a plus when dealing with quality control and quality engineering.

It was also during this short period of time since my diagnosis where my mother had been diagnosed with a non-cancerous, but aggressive brain tumor, a cousin was also diagnosed with a malignant form of cancer, and I was now dealing with both of those personal things while learning about my Klinefelter Syndrome/XXY diagnosis.  Prior to starting on testosterone therapy, any one of those things would have sent my life into a tailspin, but now I was able to deal with all three and working to move forward in my life.  Things had certainly taken shape with this diagnosis in a short period of time and I was really taking my life into my own hands.

I accepted the job offer near Boston, Massachusetts, and found an apartment to rent in the area near my new job and in July 1996 moved and set out on my own.  Though I matured quickly with a combination of my testosterone and having to negotiate to be completely on my own, I felt good about my life at the end of the day.  I did determine that I was still in need of Klinefelter Syndrome support.  At the time, I knew of only one other adult with the condition in my new area.  There wasn’t a support group or support network in the area, as there had been in Silver Spring, Maryland.